Around the year 2015, when my wife passed me the poem „Nana de Gaza“ de Carlos Piera I was filled up with music and the few lines immediately turned into a song. But after finishing it, for some reason I was not really convinced of the result and I felt I would have to leave my first sketches for future days.

In 2021 I listened to these recorded sketches again and finally I knew that it was obviously the language (Spanish) that didn’t fit for me, so I had to write a new version of this poem, basically staying close to the main ideas but sculpturing as well something new to create more than just a translation. I had to change some parts adapting it to the sound and (my personal) feeling of the English language … actually trying to make it my own. For me, English lyrics are able to express things extremely pure and straight. So, as being a foreign language for me, it also provides me some kind of necessary distance in order to write about some high sensitive topics. For these reasons, it offers me a way to sing with confidence freely about the (for me) unspeakable. The singer-songwriter Michael Morrissey helped me to work on the verses and to make them sound exactly the way I wanted them to be:

lullaby in times of war

hush my little child in the cradle
i’m here for you, don’t be sad
so when death comes here to find you
will find you peaceful in your bed

close your eyes, my pretty darling,
soon it’s over, don’t you weep
so when death comes here to find you
will find you asleep.

sleep, fly far away
when you find dead cats among the ruins
with them you will play

sleep, my love, oh sleep
so maybe when death comes here to take you
will take me

„Crossing-Over“ (not a mere translation) to German

The first musical phrase should be played by one of these small music boxes, we all used to have, when we were children. They used to have a winder and you would sit there and play the same tune over and over again. Some kind of musical meditation or in this case, focusing on a melody to forget about the hostile environment. To realise this particular sound, I recorded one note of some of my children’s music boxes and, using a music software application, turned it into a sampled music-box-instrument. With this instrument, I could play and record any melody on the keyboard sounding exactly like a small music box.

In the very beginning of the song, in my imagination the jets of the air raid are approaching and, yes, in fact there is also a sample of a real jet fighter just before the music box melody starts for the second time. For me, the winding of the small wooden music box is like a break of time, a looking for shelter, a magical, secret space far beyond everything frightening. It’s like a mother’s/father’s prayer saying: „Give me three more minutes to say goodbye.“

The contrast between the sad melody/lyrics on the one hand and the subtle percussion groove that tends to make you move your body on the other hand is something that I do very often in my arrangements. „Hope and despair“, „love and death“, „being close and leaving“ are not mutually exclusive terms but necessarily belong to each other. Above all in an artistic perspective of a focused moment in someone’s life that brings up all the innermost feelings of love and fear …

The Oud (arabian short-necked lute) forms the counterpart of the voice, inviting it to a gentle dialogue, representing the tremendous power of hope and love that cannot be broken either by death.

Finally, in the ending, the child falls asleep and the music box’s melody vanishes, transforming itself into something wonderful and new in the great beyond …

Surrounded by some incredibly good dancers and artists, I decided to ask some of them to realise a video project of one of my songs. In this case, we chose „Lullaby in Times of War“ being the one and started brainstorming. I was so surprised how deeply these dancers could make it their own, profoundly diving into the emotions of this song and when I saw them moving and performing during the first (and last) improvised shooting, we shared a tremendous non-verbal unity, which had a huge impact on the quality of the video material. Choosing and editing all these brillant takes we had filmed, took us really some time and together with the outstanding photographer and film-maker Jürgen Gocke, at the end we created this beautiful video, full of individual creativity, empathetic unity, pure emotion and artistic mastery.

The sadness of the fact, that there are still so many children and parents suffering from war and expulsion, in my case is tremendous and sometimes even it frightens me, because this is „only“ empathy. I never had to deal with that extreme kind of situation. But actually I’m really close to it: My mother and grandmother had to go through this during the second world war when my mother was only two years old and I think that during her life music helped her a lot to cope with these nightmare memories. There are so many people struggling through the deepest valleys of human conditions … and what about all these poor kids, what about their disappeared laughter, their broken innocent view of all this?

Well, here it is and everybody who wants to express her/his gratitude for the effort of making this video or who wants to help children in need is welcome to join the project by contributing with a donation and/or the spreading of the project via social networking etc. Any contribution, no matter how is highly appreciated!!!

If you have any questions about the project, please contact me! Best, Jörg 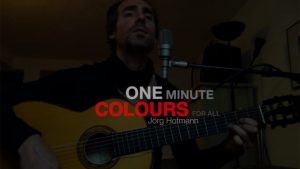